Gig
Of The Month 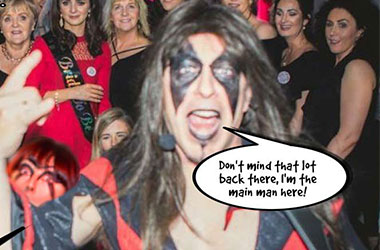 We don’t get to play The Penny Blue Club in Lucan that often, but when we do it always gets a little out of hand and this night was no exception 😉

Can’t remember what song it was but all of a sudden the stage is full with a great variety of ladies. Some sober(ish) and some, well, fairly hammered as they say 🙂

It took the (nervous) bouncers quite a while to clear the stage that night…..apparently, we were not supposed to have people from the audience up on stage in the first place LOL.

Anyway, this pic was asking for some comic comments as I’m sure you’ll agree!

Here’s a comic of the gig.

Do join in the fun here by posting a comment.
Keep it clean now! LOL